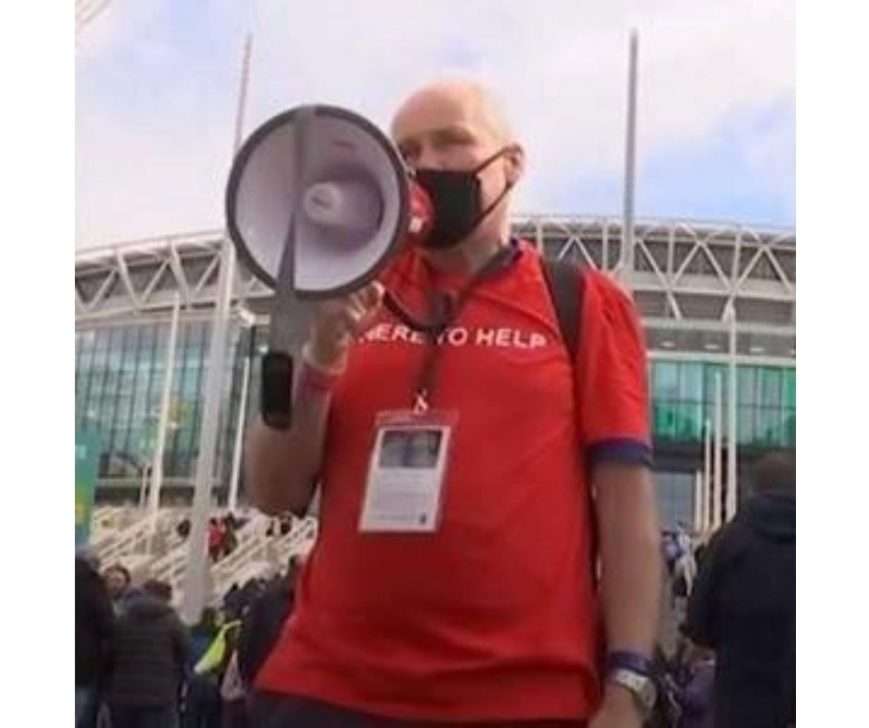 Kevin Stewart Business Unit Leader for Revenues and Benefits at MSDC is well known for his volunteering and turning up at virtually any event.  Well the weekend of the 15th and the 16th May 2021 was no different.

The morning of the 15th May was a train journey to City Hall to pick up my London Squad uniform for the EURO2020.  After picking this up it was off to Wembley for a 1pm rendezvous with the EURO2020 volunteer management.  I had been asked to volunteer for the FA Cup Final – they called me! – and said bar the first 15 minutes I could watch the match in the stadium.  Being a Chelsea fan since 1969 to be one of the 21,000 in the crowd following a year of no spectators was just amazing for me (I am told Martin Falconbridge being an avid Leicester fan was particularly jealous!).

I was selected as a Team Leader and placed in front of the new Wembley steps (with the megaphone!) to welcome Chelsea and Leicester fans to the 2021 FA Cup Final.  Being one of the selected trial events to get spectators back to major sporting events we had to follow certain rules. 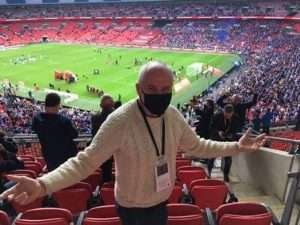 Each participating club was given 8,000 tickets with the remaining 5,000 tickets given to the local community and me being the lucky recipient of one.  We were on duty at 2pm for a 5.15pm kick off and the first hour was very quiet as the gates did not open until 3pm.  About 3.30pm for an hour or so it got really busy and the megaphone came out being used to the full asking people to use the gates behind and asking them to get their negative test result out.  The Leicester and Chelsea fans were in good banter even mockingly pinching my megaphone at one stage (caught on youtube video).

Chelsea fans are historically notorious at arriving late but on Saturday they did not so from about 4.45pm it went quiet again.  We were stood down just before the kick off at 5.15pm and after a de brief allowed into the stadium to watch the rest of the final.  I had previously watched Chelsea at the old Wembley in the 1997 FA Cup Final so this was my second final I had watched.

We were placed amongst Leicester fans which was interesting but they were amazing and we got on really well.  A discussion with one Leicester fan agreed that it would be a one goal game as early as the 26th minute.  The goal when it came was a classic although we experienced the confusion of a later VAR decision.  It was the right decision but we did not have a clue in the stadium.

So despite the result another amazing experience to add to the ones I have already experienced over the years.  I got home about 10pm proud I had played my part in bringing spectators back to major sporting events. It was good preparation for EURO2020 and being a Mobility Maker Volunteer Lead.  The one match I am really looking forward to is England v Scotland on the 18 June 2021.

After the FA Cup Final experience the next day was a more surreal volunteering experience at Whipsnade Zoo.  I am able to volunteer at either London or Whipsnade Zoo but during COVID have had to select one or the other.  The animals are just amazing but there is one character that has more front than Kevin Stewart.  It is Blue the Ostrich who was despatched in disgrace from Longleat as he gave up his daddy ostrich duties to play with the zebras.  He is a very mixed up ostrich!  He is a real character though as he just loves a crowd but loves to peck people.  He has a huge pen but patrols up and down the perimeter fence and my duties have included babysitting the ostrich, who can trust me really move!  It certainly has kept me fit running after him and shouting at people to move away from the fence!!! (I may well appear in more youtube videos) 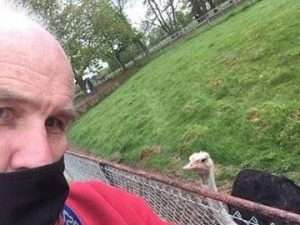 After a very busy 14 months it was great to be back doing something I love in the volunteering and taking a break from paying grants, collecting taxes and administering benefits.  The new normal and summer has started!!